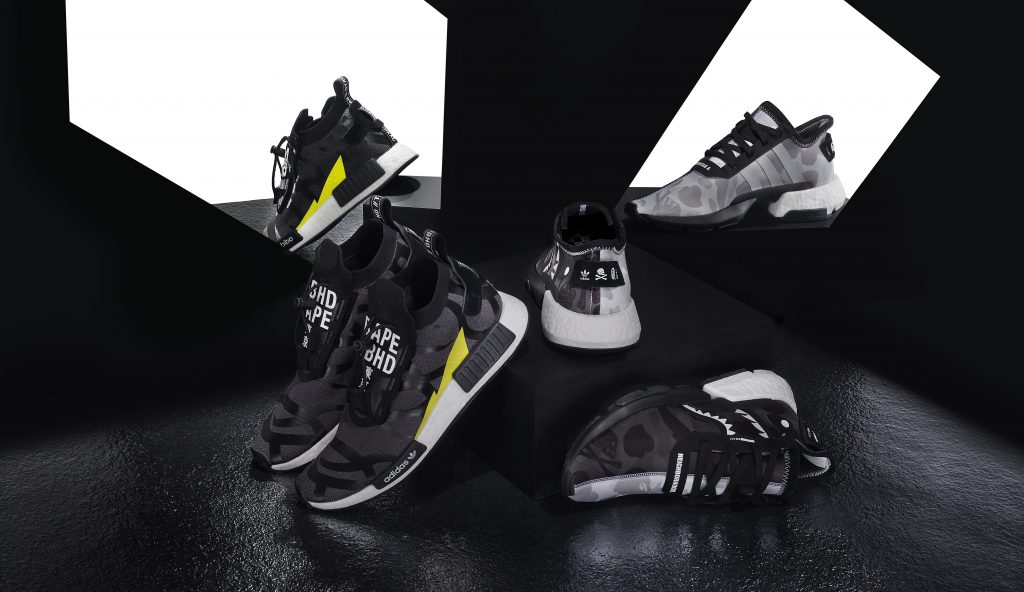 adidas Originals are teaming up with long term partners A Bathing Ape and Neighborhood, two pioneers in Tokyo’s streetwear scene.

For Spring/Summer 2019, both labels are collaborating with adidas on the POD 3.1 and NMD STLT silhouettes.

On the POD 3.1, motifs and design elements from both brands are etched into the sneaker such as BAPE’s Ape Head and Shark Teeth, alongside NBHD’s skull and crossbones.

The NMD STLT, on the other hand, takes on a more minimalistic approach, with both labels opting for their branding in text form.

The adidas Originals x BAPE x Neighborhood collection will be available from purchase on adidas.com.sg from April 19, 2019.

For a closer look, check out the sneakers below. 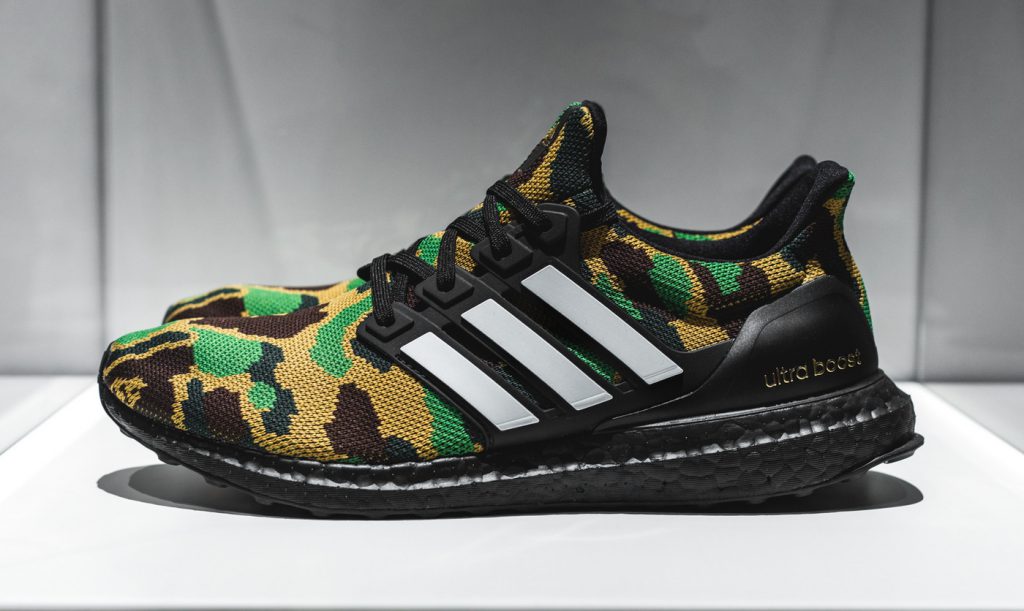 After months of speculation and samples, we now have an official look at next year’s BAPE x adidas UltraBOOST collaboration.

Dubbed as the “football” collection, in conjunction with the Super Bowl, will also arrive with cleats, an American football, an NFL helmet, and jersey.

In the spirit of a typical BAPE collaboration, the entire collection features the famous BAPE camo pattern throughout.

The UltraBOOST will feature a camo upper, with a blacked out BOOST midsole, white Three Stripes and metallic gold branding on the heel counter.

HYPEBEAST had an official look at the collection in Japan over the weekend during BAPE’s “XXV” 25th-anniversary exhibition. For a closer look at the UltraBOOST, check out HYPEBEAST’s photos below. 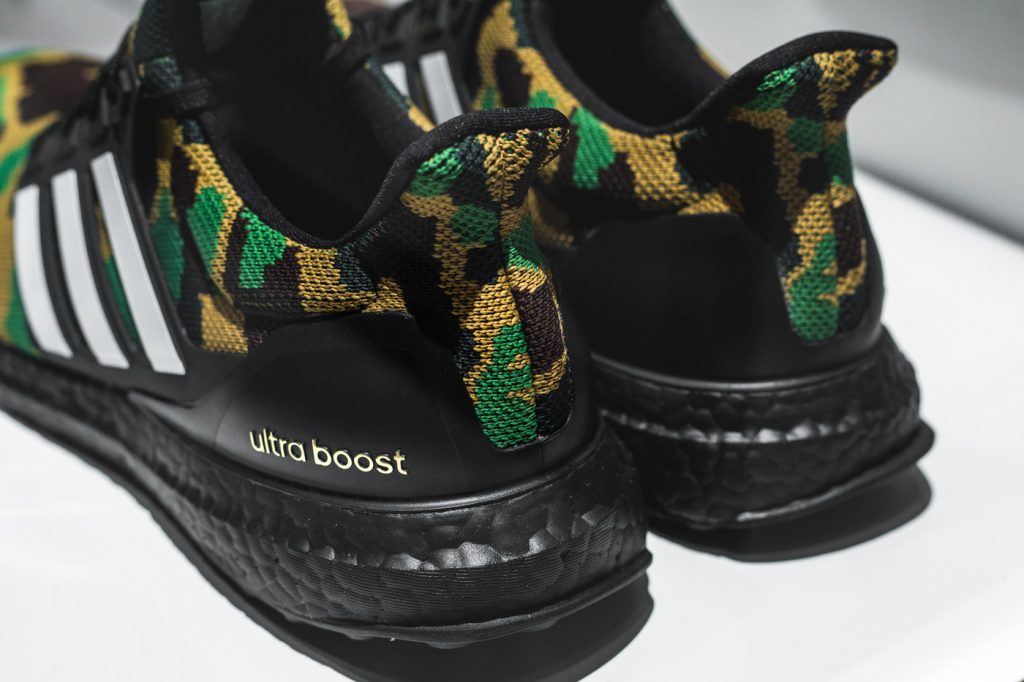 After news broke regarding two upcoming BAPE x adidas UltraBOOST pairs next February, it appears that the partnership involves more than just sneakers.

Set to release in conjunction with Super Bowl 2019, the collaboration will be a full fledge collection which includes BAPE’s popular Shark Hoodies, American Football jerseys, cleats and an NFL helmet.

As expected, the pieces will heavily feature BAPE’s camo motif throughout, across the options of green and black colourways.

Insider group @py_rates posted several images teasing the collection, including a list of the items that will be included and expected prices.

Its no secret that @adidasoriginals & @bape_us will be dropping a pack of UltraBoosts next February but we thought we’d shed light on what else is scheduled to drop during the release. The most notable pieces in our opinion are the Shark Hoodies & the Riddell Helmet. Let us know what pieces you’ll be looking to cop from the collection in the comments below. #NoMoreSecrets🏴

BAPE and The Weeknd Are Collaborating On Some Neat Apparel 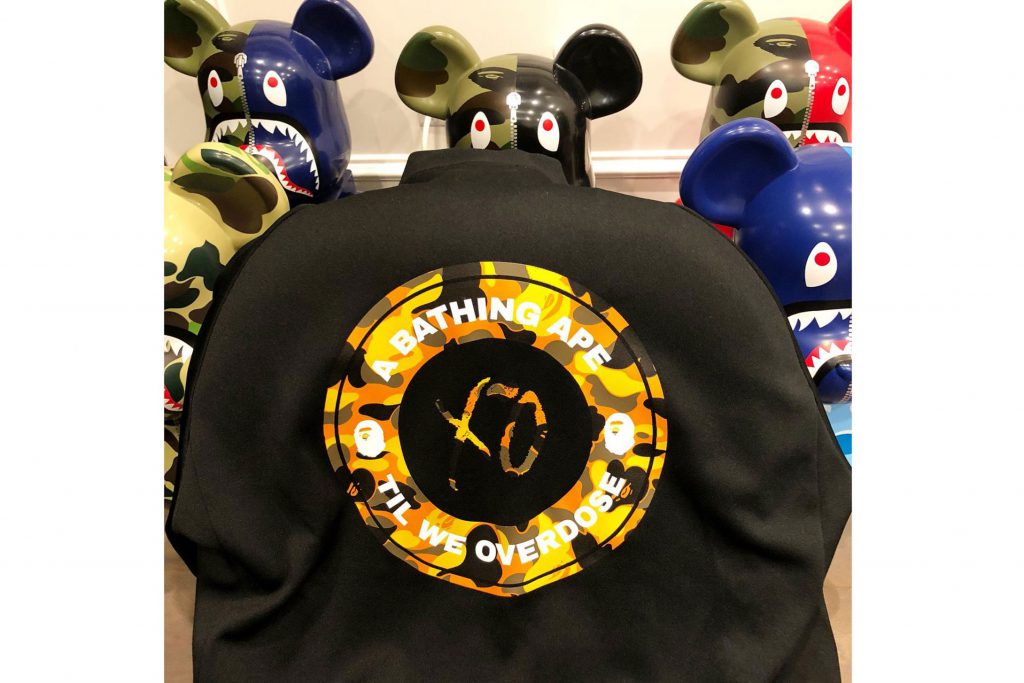 After teaming up with brands like H&M and Puma, The Weeknd teased a new collaboration with Japanese streetwear label A Bathing Ape.

Taking to social media, the singer posted a picture of an unreleased black jacket featuring a BAPE circle in yellow camo with his “XO” signature in the middle.

The picture is captioned “coming soon”, suggesting that more details regarding its release are just around the corner.

The Canadian native has been on a roll in recent times with expanding his brand outside of music, having recently teased an upcoming Starboy comic with Marvel. The collection comes predominantly in black and gold, featuring the use of high-grade premium materials.

Signature branding elements such as the Ape head, Bapestar and Shark can be found on the pieces, mostly embroidered to maintain its premium look and feel.

Set to release on January 27 worldwide, check out a portion of the collection below. For more information and a closer look at the whole collection, check it out here. 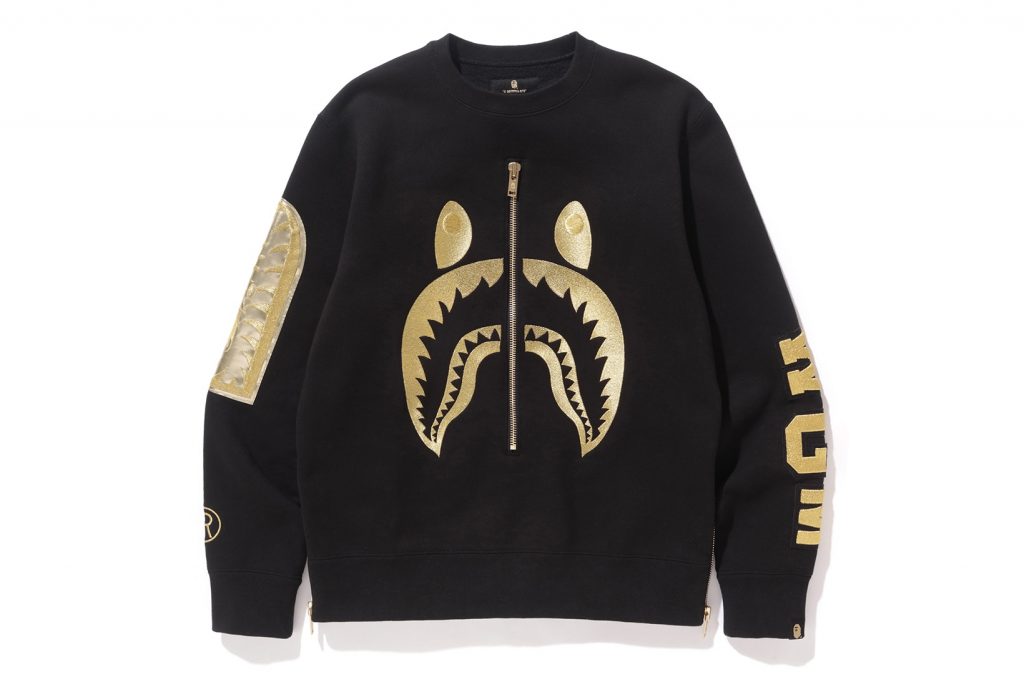 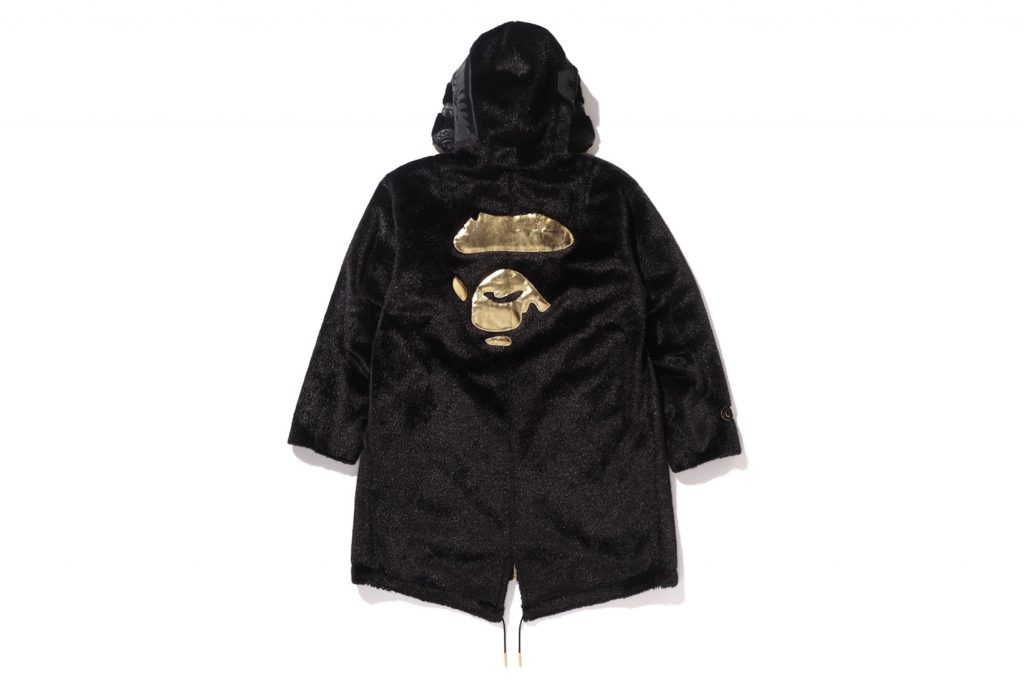 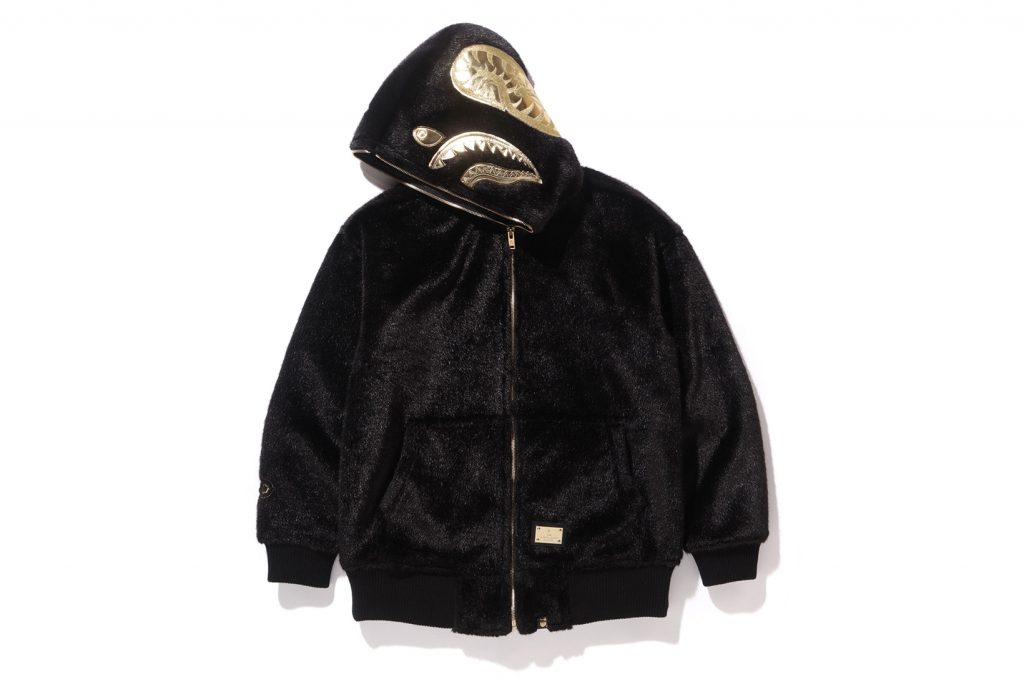 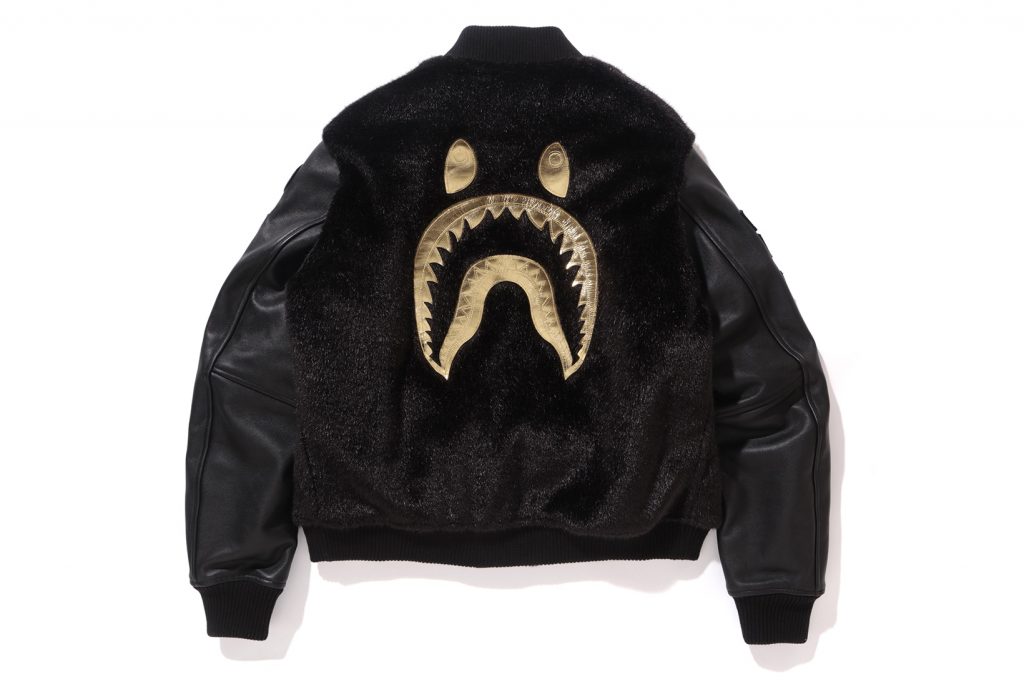 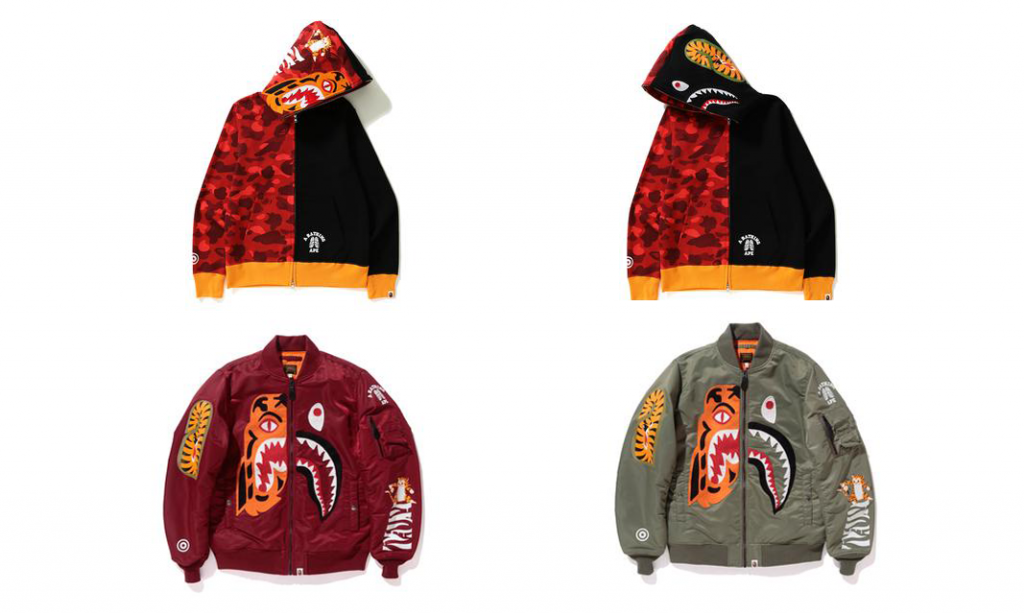 A Bathing Ape is bringing back the Tiger Sharks this Singles’ Day weekend.

A new collection of Tiger Shark goods are dropping for Fall/Winter 2017, featuring camo motifs alongside Tiger Shark prints across a range of hoodies, pullovers, jackets, bags, caps, and T-shirs. 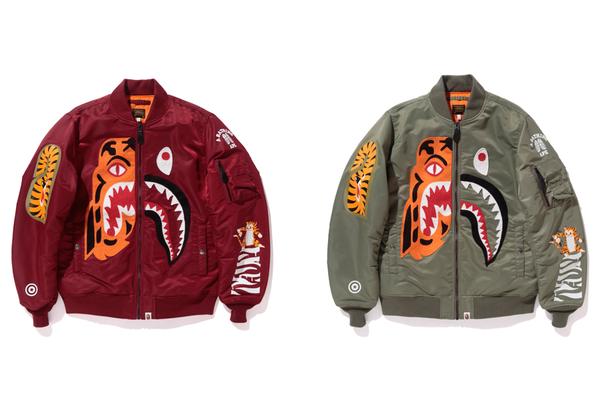 The drop will also contain BAPE’s two-coloured hoodies and sweaters that split in the middle. The hoodies also feature zippers which go all the up to the hood. MA-1 jackets in olive and burgundy will also be included.

Besides the Tiger Sharks, BAPE’s Colour Camo collection for Fall/Winter will also be  dropping with hoodies dressed up in blue, red, olive and purple.

To ensure you secure the latest drops, local reseller Novelship is taking pre-orders before November 11.

What’s more, the site will be having an exclusive 11.11 promotion, giving $11 off orders from this upcoming BAPE drop. There will also be an 11% discount on their Ready-to-ship collection. 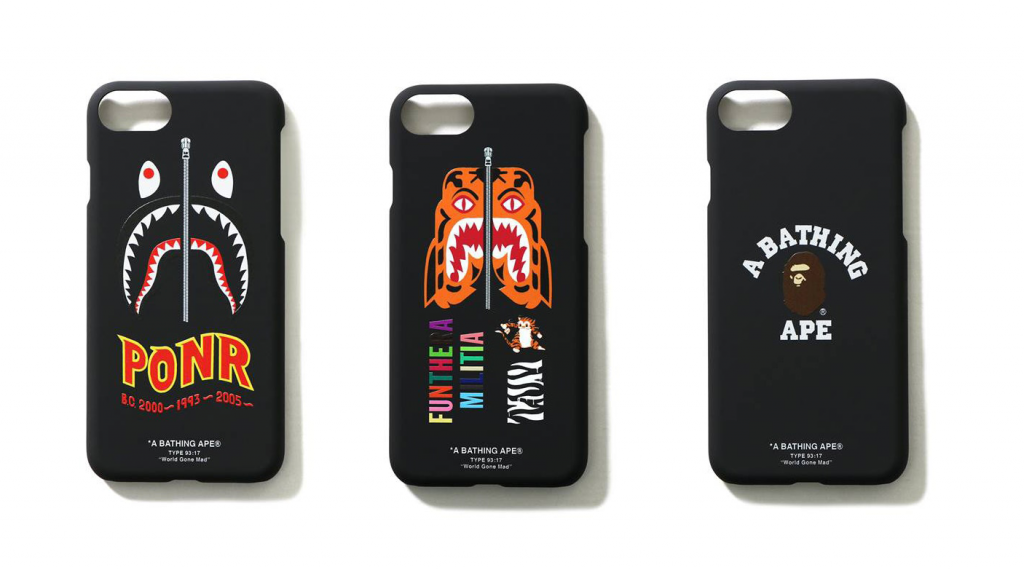 An assortment of A Bathing Ape iPhone 8 cases are set to drop on October 28, showcasing some of the label’s most recognisable motifs.

They include cases that display Ape Heads, Shark Hoodies, as well as other iconic Bape designs. Each iPhone 8 cover will feature branding that states “A BATHING APE”, “TYPE 93.17” and “WORLD GONE MAD” at the bottom.

The cases are designed for both the iPhone 8 and iPhone 8 Plus, so if you’ve recently purchased Apple’s new smartphone, here are some flex materials to get you going.

Set to drop on October 28, you can start pre-ordering your cases at Novelship before 9am on Saturday.

Other items dropping tomorrow on Novelship include a range of 1st Camo Scarfs, 1st Camo Wide Full Zip Hoodies and the Bape x Porter collection of bags and wallets. BAPE has done it again, going full force with a set of coach jackets collaboration with sportswear apparel specialists Majestic.

This limited edition sportswear features a blue and white jacket with the BAPE logo imprinted on the chest along with the words BATHING APE and the number “93”  printed at the back.

Both Majestic and BAPE logo can be found on a tag located at the sleeves.

This drop is available now at BAPE retailers around the world, Check it out below. 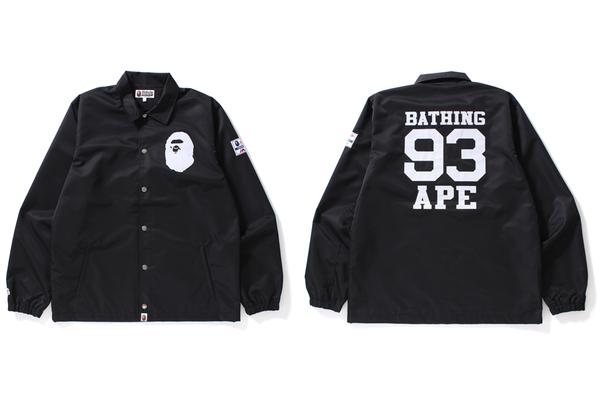 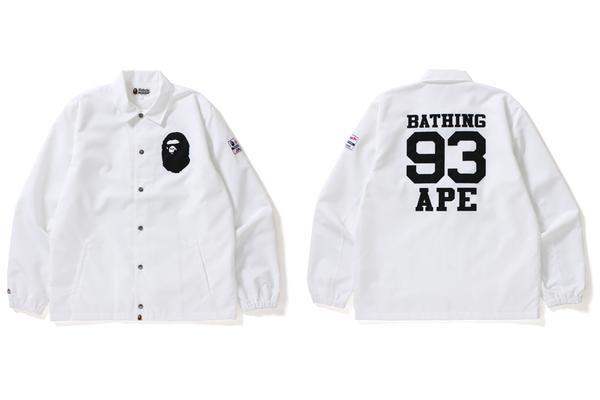 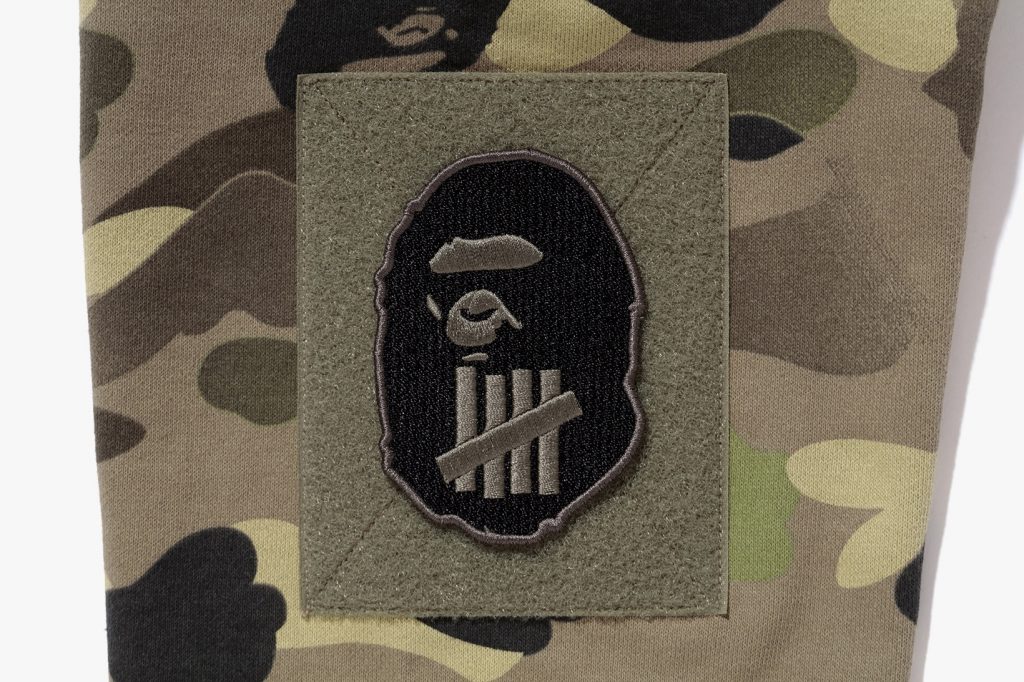 A Bathing Ape Singapore has announced that the UNDEFEATED x BAPE Spring/Summer Collection 2017 will be dropping in Singapore on May 20.

The collaboration between two of the biggest streetwear labels in the world dropped globally last month, featuring familiar brand elements of both throughout the collection. 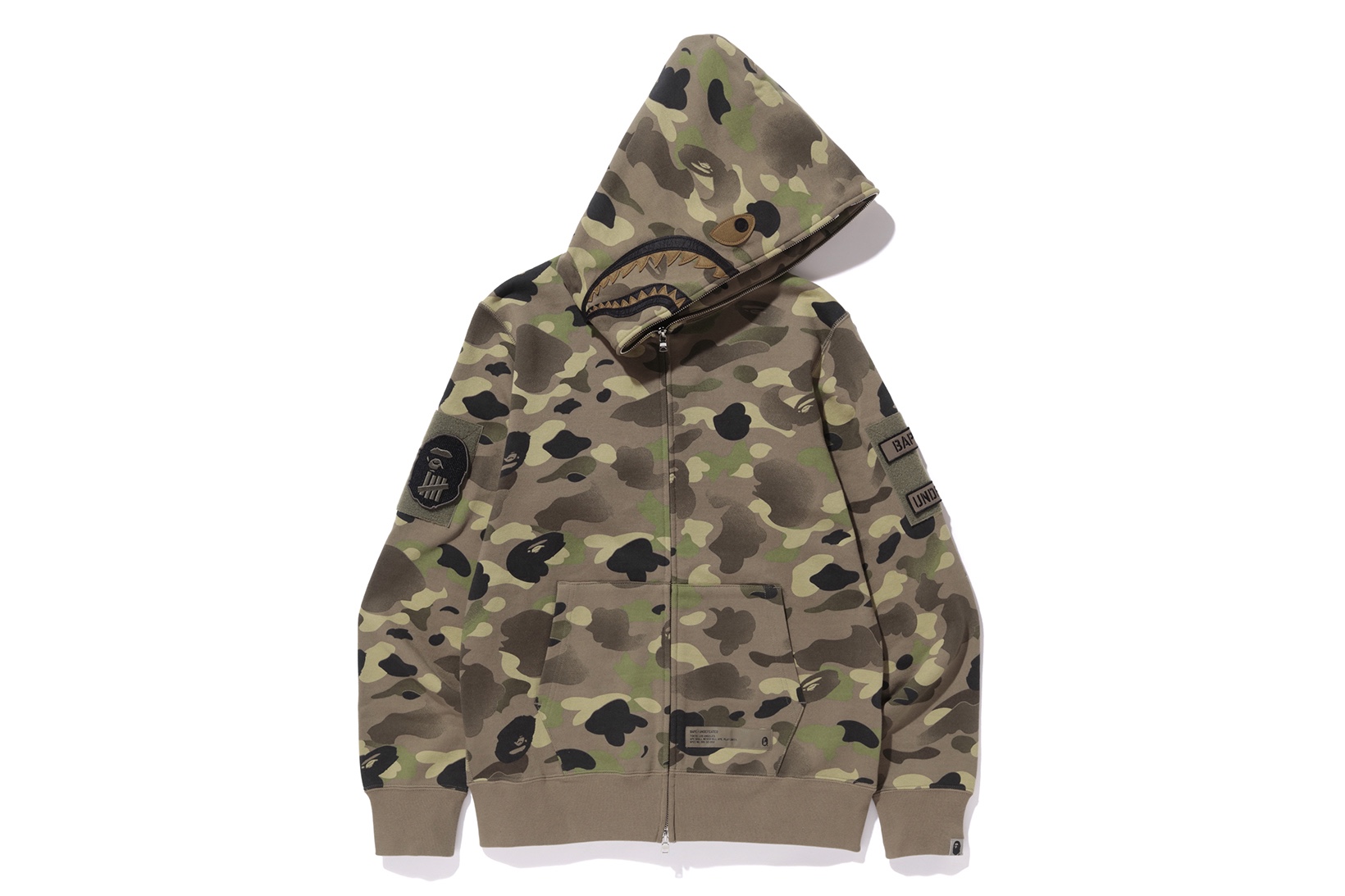 Besides BAPE’s iconic camo and Shark motifs, the collaboration sees the Ape logo appended with UNDEFEATED’s five strikes across it.

The collection will be available from BAPE SG’s Mandarin Gallery store with t-shirts, a hoodie, and sweatshorts up for grabs.