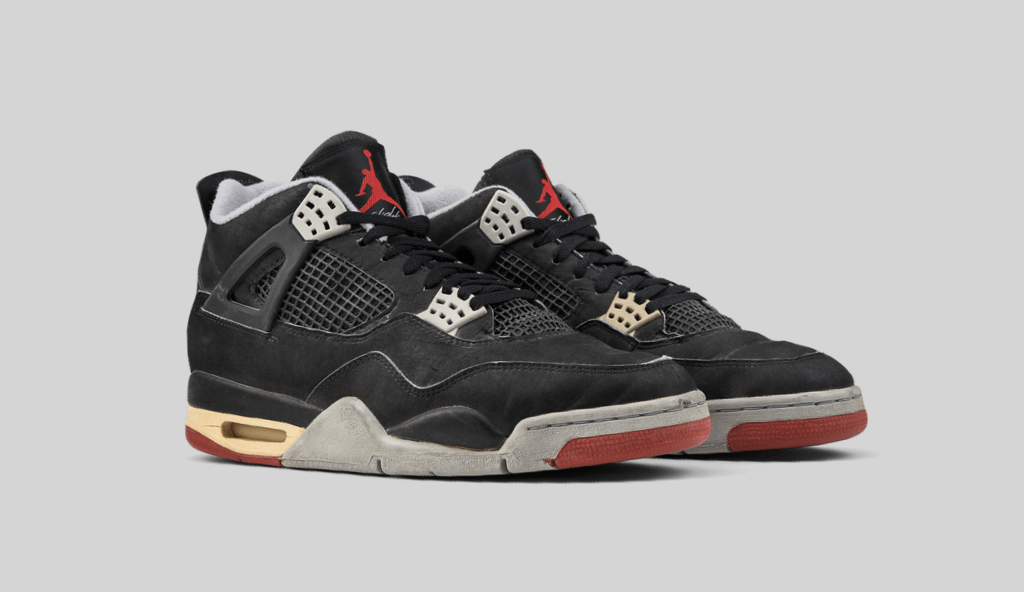 It’s hard to fathom that 30 years has already passed since the introduction of the Air Jordan 4 but it’s this precise longevity in the game that makes it as iconic as it is.

Making its first appearance in February 1989, Michael Jordan debuted the pair during the NBA All-Star Game in Houston that month.

It wasn’t long until the silhouette made waves when Jordan scored an incredible 44 points during the NBA Playoffs that year against the Cavaliers.

The “Bred” took centre stage when Jordan made the buzzer-beating winning shot, beating the Cavs at literally the very last second in Game 5.

That moment would go down in history as “The Shot” and with it, the Air Jordan 4 “Bred” was cemented in sporting history.

A lesser known fun fact is that while the pair is more commonly referred to as “Bred” due to its black and red tones, it’s actually formally known as “Black Cement” for its Black uppers and Cement Grey front midsoles.

Legendary designer Tinker Hatfield had a momentous task at hand when he crafted the silhouette – how to top one of the greatest sneaker designs in the Air Jordan 3.

Hatfield chose to stay true to the brand, not changing what wasn’t broken, and adding elements that elevated the look such as the mesh netting on its sides and the iconic “wings” on the laces.

The result was astounding and not only did it top the Air Jordan 3, most sneakerheads would have it on its Top 3 of all time today.

As with most iconic Jordan sneakers, the Air Jordan 4 “Bred” had a retro re-release in 1999, following Jordan’s second retirement from basketball.

Its upcoming re-release on May 4, 2019, will be its first since 2012 and will be the closest the shoes will ever look in comparison to the original. They’ll even arrive in their original box, the first time ever since 1989.

The Air Jordan 4 “Bred” will arrive in Singapore and Malaysia on Saturday (May 4) at 9am via Nike.com in sizes for adults, kids, younger kids and baby/toddlers.

For more details on the 4 drop, check out our article on how you can cop them.

adidas x Billionaire Boys Club NMD Hu “Plaid” Drops in Singapore on May 3
JD Sports SG Is Giving Up To 50% Off Sneakers, Apparel and More
To Top