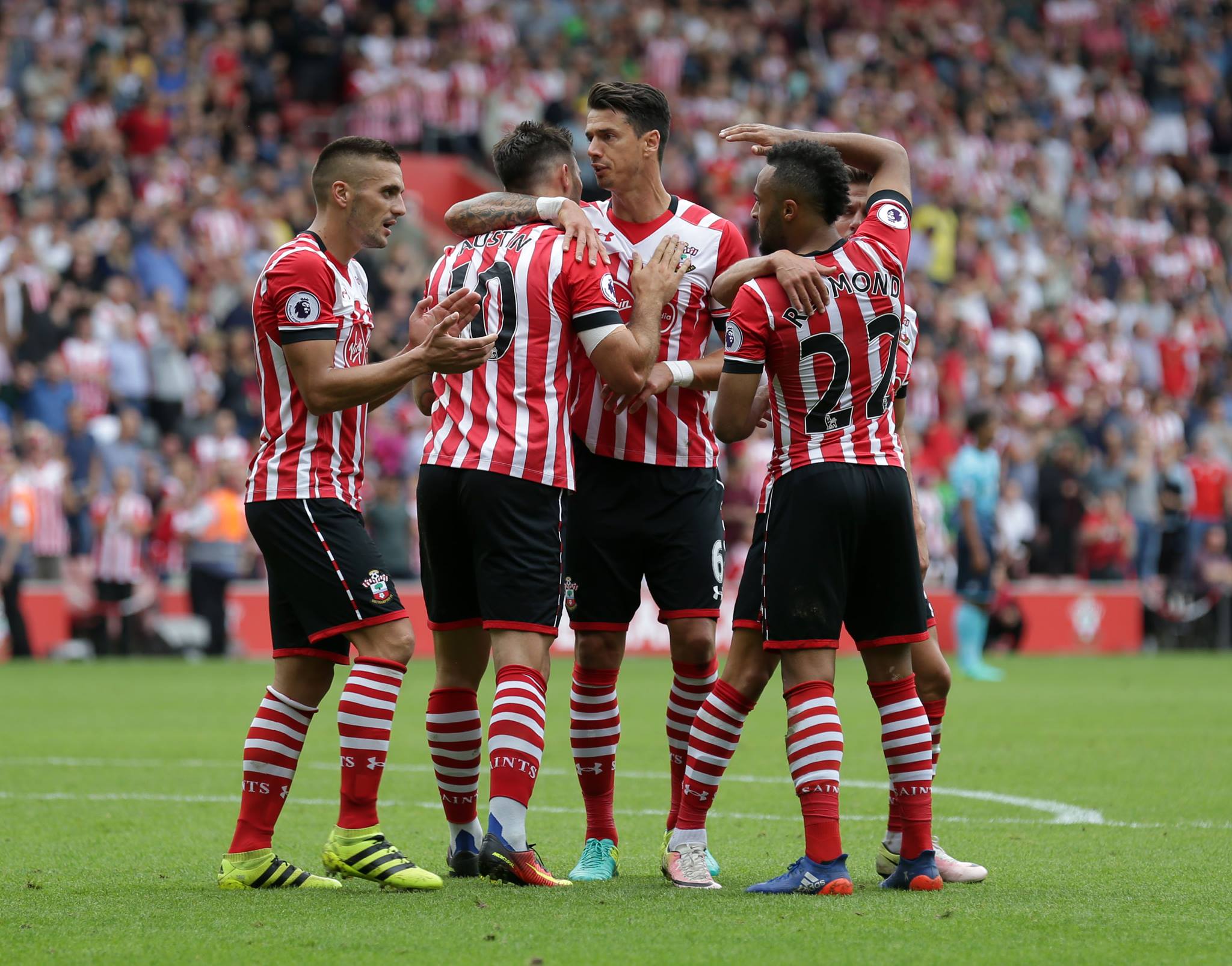 When The Saints Go Marching In – Keeping Tabs on Southampton

With the shock of Leicester City being crowned as Champions finally subsiding, the 2016/7 Premier League season has returned to a sense of normalcy.  The conversation is again about the “big six” of Arsenal, Chelsea, Liverpool, Man United, Man City and Tottenham, where qualification for an exalted Champions League place is the minimum.  None of this should be too surprising, as success on the field is key to maintaining each club’s brand and status as one of the top clubs in Europe, and the world.

General interest in the mid-table sides has also dimmed, without teams like Leicester and West Ham punching above their weight.  The incredible achievements of last season, where an ensemble cast of Jamie Vardy, Riyad Mahrez and Dmitri Payet wreaked havoc upon all Premier League defences, have given way to the winds of winter – despite Leicester’s fine 4-2 over Manchester City on Saturday, which seemed more of an anomaly than a return to form.  Challenging the status quo will have to take a backseat with the fear of being sucked into a relegation battle becoming very real.  Even so, we should not neglect mid-table sides that play good football, and have the potential to challenge for the European places.

More than just a Feeder Club

One such side is Southampton.  The Saints are accustomed to having the heart of their sides ripped out in successive summers.  Mainstays including Sadio Mané, Adam Lallana, Nathaniel Clyne, Dejan Lovren, Luke Shaw, Morgan Schneiderlin and Victor Wanyama all left for bigger clubs in the Premier League after a fruitful time on the south coast.  Last season’s chief goal threat Graziano Pelle also faded into obscurity when he elected to join Chinese club Shandong Luneng, but he will be richly remunerated for his troubles.  Departures remain an institutional problem for the Saints, with famed academy products Gareth Bale, Theo Walcott and Alex Oxlade-Chamberlain, all heading down the well-trodden path years before.  Ronald Koeman’s departure, just like Mauricio Pochettino before him, demonstrated that their managers too were not immune to the charms of a bigger club, and sparked fears of another difficult season ahead.

Against this backdrop, Southampton has performed above expectations halfway into the season.  Claude Puel’s appointment as manager six months ago was greeted to little fanfare. Coincidentally or otherwise, his tenure at Olympique Lyonnais coincided with the end of their dominance of the French Ligue 1. Not only have his tactics and bold team selections paid off, but put paid to any suggestion of the Saints becoming relegation fodder post-Koeman. A number of strong displays have demonstrated that the Saints have the defence to shut out games, and the attack to win them. On reflection, this should not be too surprising given the current quality in the Saints’ ranks.

Fraser Forster, quite literally, is a massive presence as the last line of defence.  His clanger against Crystal Palace aside, the big Geordie has good shot-stopping ability that has rescued the Saints a few times this season. Virgil van Dijk and José Fonte form a solid platform for an outfit designed to play out from the back.  With good centre-halfs in short supply across the League, it comes as no surprise that both have been linked with much bigger clubs in January, and beyond.  On the flanks, first team regulars Cedric Soares and Ryan Bertrand offer defensive resilience and diligent attacking outlets on each side.

Oriol Romeu never established himself at either Barcelona or Chelsea, but he has done a sterling job at the base of Southampton’s midfield.  Romeu may lack a little pace against the very best, but his bite in the tackle and ability to recycle possession helps to keep things ticking over.  His midfield partner Steve Davis fulfills the role of terrier-in-chief, bustling around the park in search of the ball, and looking for opportunities to turn defence into attack.  Pierre-Emile Hojberg, Jordy Clasie and James Ward-Prowse may all prove to be useful across the season, each providing a different set of options from the centre of the park.

Further forward, Dusan Tadic is capable of opening up teams from the flank, offering vision and a cute left foot to boot.  Nathan Redmond has real potential, with pace to burn, and a willingness to put shots on goal.  England too will hope that his development will surpass speed merchants such as Aaron Lennon, whose final ball was never decisive enough.  The supporting cast offer good alternatives, with tricky winger Sofiane Boufal offering glimpses of his potential to draw in multiple defenders and Shane Long always likely to put in a shift for the team.  Jay Rodriguez, once a prospective England fixture, is still finding his feet after an Anterior Cruciate Ligament Injury over two and a half years ago.  Between Tadic’s playmaking abilities and Redmond’s ability to drive at pace against top flight defenders, the Saints have the right man to put the ball in the back of the net.  Charlie Austin is a real threat in the final third and a true poacher in every sense.  It goes without saying that consistent goal scorers are highly valued right across the league.

A mention should also go to Southampton’s academy, which has continued to offer a pathway for young players into the first-team.  Ironically, this was also one of the purported reasons for Koeman’s departure – a belief that academy riches were drying up.  Nevertheless, Sam McQueen seems to be a real find at left-back.  The youngster had to fill in for injuries at left-back to Bertrand and second-choice Matt Targett.  A number of strong performances this season, including away at Man City, were indicative of his promise.  McQueen has the speed and physicality to deal with pacey forwards, as well as the courage to play the ball out of defence.  Another new name that has cropped up is Josh Sims, a winger blessed with good technique and sharp movement.  Sims ran Everton ragged to a Man of the Match performance on a winning debut.  Promising displays from their youngsters indicate that while the Saints may not be producing the next Bale, they have some options within their own ranks that can step up during a hectic Premier League season.

It seems that the team’s potential has not gone entirely unnoticed.  The Saints have been linked with Chinese firm, Lander Sports Development, who are looking to build a successful brand.  If a takeover is successful, St Mary’s may offer a better platform than either Aston Villa or Wolves, Championship sides that may fulfill their potential in the long run, but are currently struggling towards the lower half of the English Football League (EFL) Championship.  It seems that the respective Chinese consortiums led by Dr Tony Xia and the Fosun Group underestimated how grueling and taxing a 44 game competition, which does not include potential play-off fixtures, really is.

The second half of the season may yet offer up more surprises.  Crystal Palace, with Yohan Cabaye, Yannick Bolasie and Wilfried Zaha in their ranks, were also deemed potential European challengers last season, before seeing their form fall off a cliff after Christmas.  We can only hope Southampton are able to carry their promise into the second half of the season, and challenge for the European places.  The reward may simply be that decent performances will only confirm another exodus in the summer.

When The Saints Go Marching In – Keeping Tabs on Southampton

That Goal From Malaysia’s Faiz Subri Beats Messi and Neymar, Makes It To Round 2 For Goal of the Year
Singapore’s Hariss Harun Set To Join A Portuguese or Japanese Club Next Year
To Top