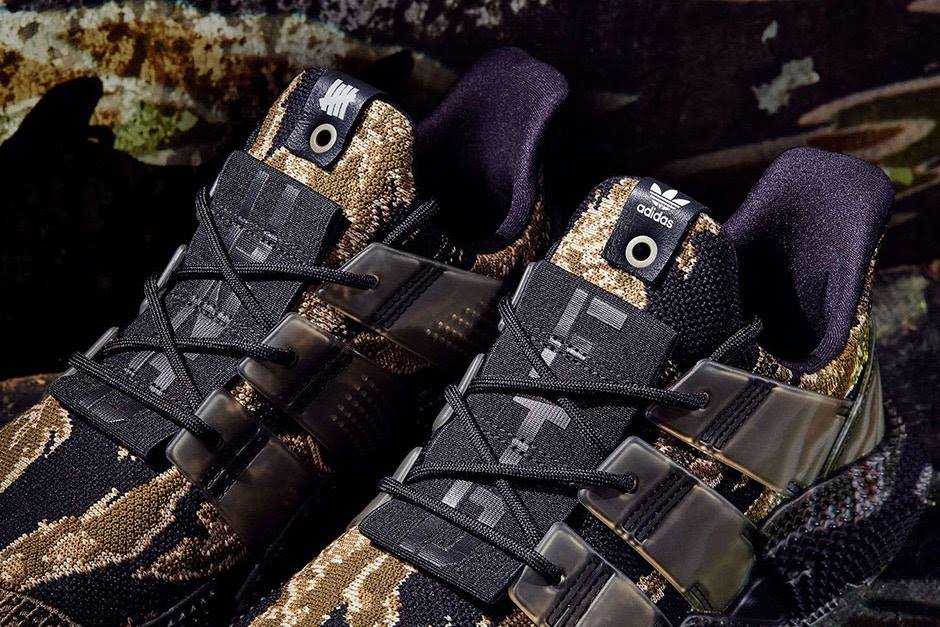 The upcoming collaboration between adidas Originals and streetwear label UNDEFEATED is set to drop in Singapore on December 23.

The pair will be released at both Limited Edt and Dover Street Market Singapore.

Dover Street Market will be releasing the shoe both in-store and on its online e-shop on December 23.

A post shared by Dover Street Market Singapore (@doverstreetmarketsingapore) on Dec 22, 2017 at 6:17am PST

For Limited Edt, the release will exclusive for VIP members via an online ballot. Interested members will be required to place their ballots on LE’s VIP booking page on December 22, between 3pm to 9pm.

Winning members will be contacted between 9pm to 10pm via email. Any remaining pairs will then be released to the public on Dec 23 at LE Vault (313 Somerset).

A New UNDEFEATED x adidas UltraBOOST Might Be Dropping in March 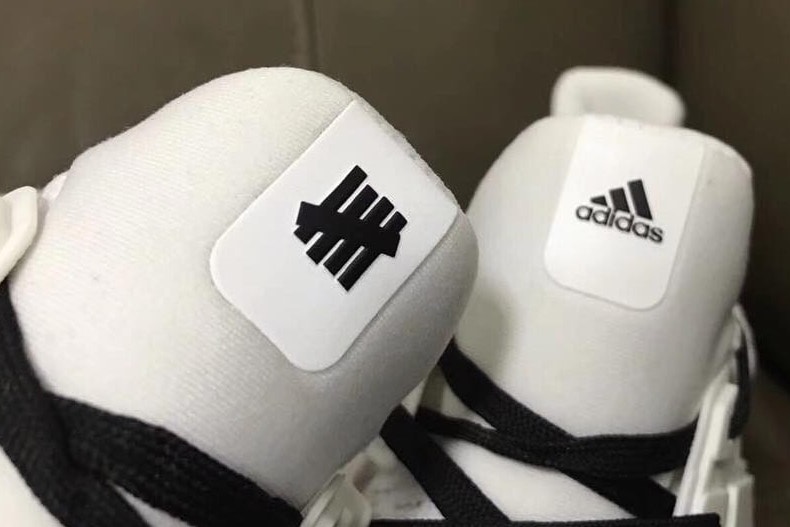 UNDEFEATED’s collaboration with adidas isn’t slowing down anytime soon. In fact, the two heads are about to blow things up with two new UltraBOOST collaborations.

The first leak back in early November previewed a black UltraBOOST with white UNDEFEATED motif  across the front on both sides.

This time, the latest leak by Yeezy Mafia showcased the exact same UltraBOOST with the UNDEFEATED motif across the front. The only difference is the alternate colourway – a white upper with black texts.

Both adidas and UNDEFEATED branding can be found on the tongue tabs and insole.

We can expect this collaboration to release sometime in March 2018, alongside the black edition, so stay tuned for updates. 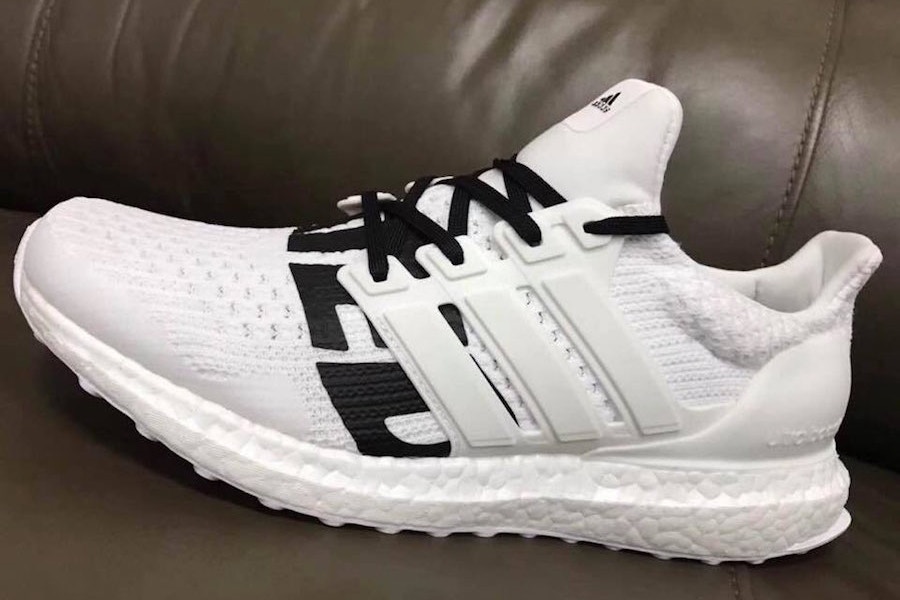 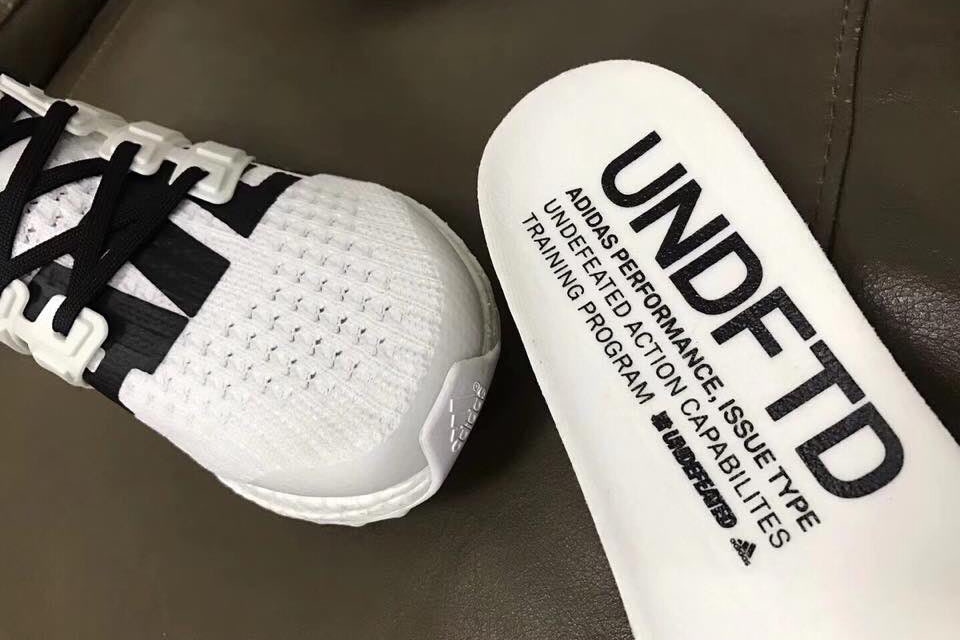 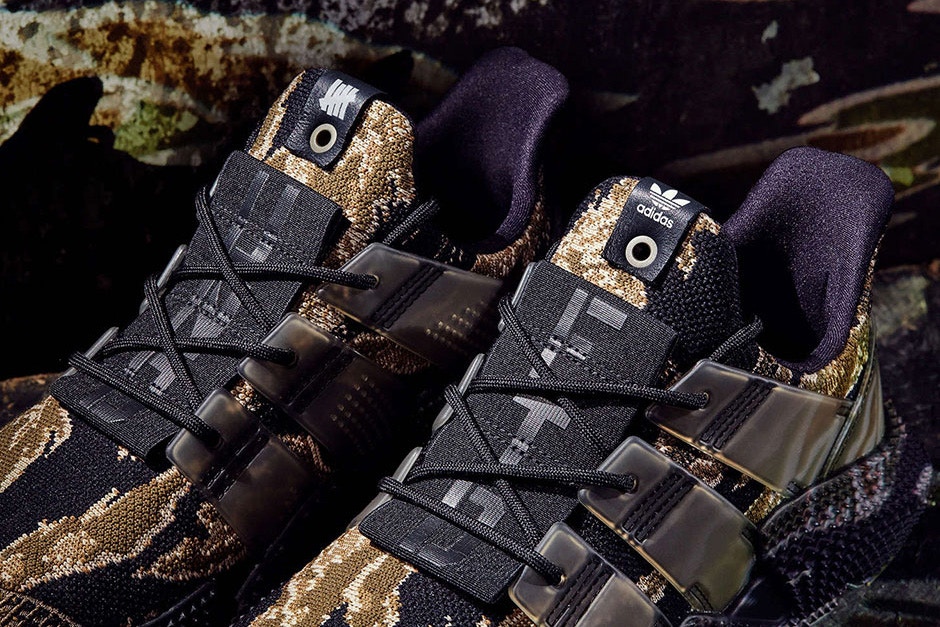 END. Clothing has given us a closer look at the upcoming UNDEFEATED x adidas Original Prophere “Tiger Camo”.

This pair will feature knitted a “Tiger Camo” pattern over the upper, with UNDEFEATED branding located under the laces and a co branding on the tongue tabs/heel.

The signature adidas Three Stripes can be found on the lateral side in translucent TPU material, seated above a large black midsole.

We can expect this pair to be available on the 23rd of December at END. and selected adidas Consortium retailers. 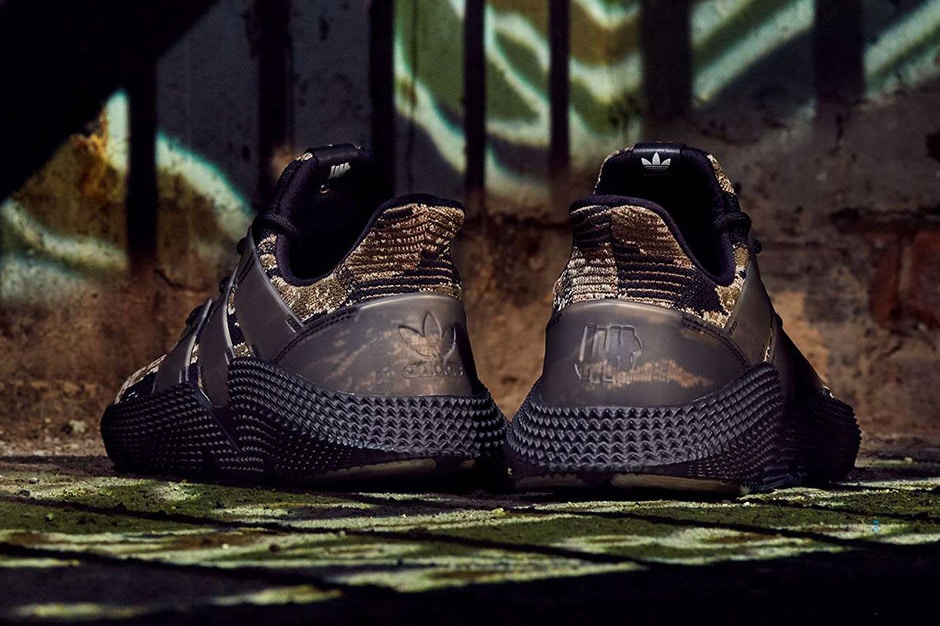 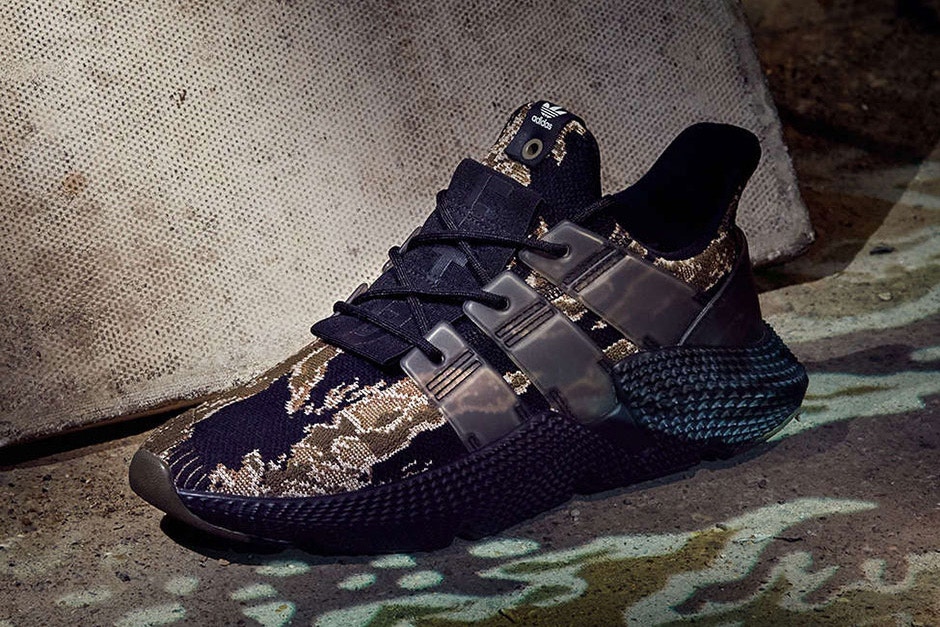 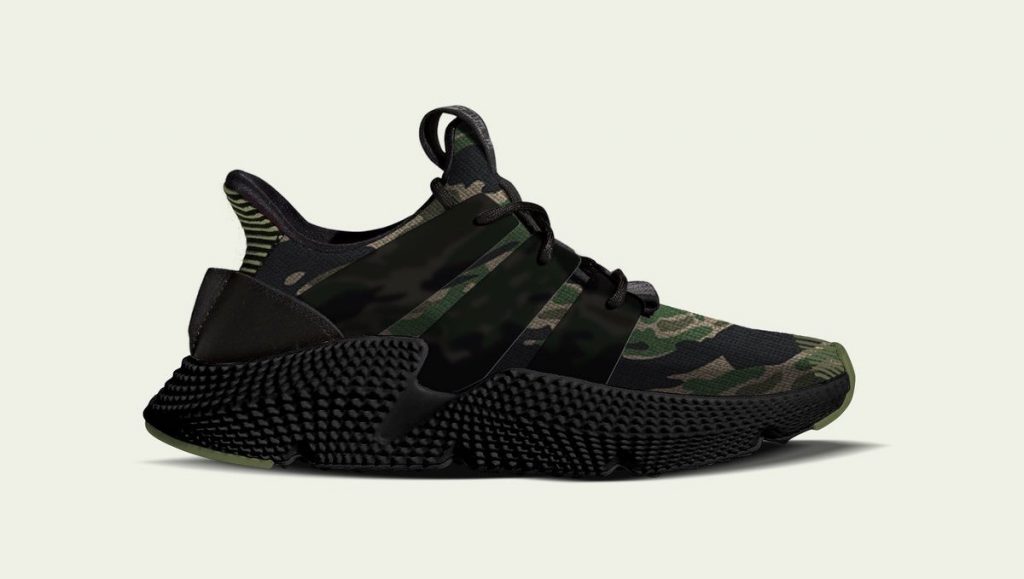 Right after adidas had officially unveiled its latest silhouette dubbed the Prophere, the rumour mill is abuzz regarding a collaboration with UNDEFEATED.

The streetwear label is said to have a team up with adidas on the Prophere, which is set to pre-release via Undftd stores on December 16, a day after the Prophere debuts officially.

The upcoming collaboration will then release at select adidas Consortium stores around the world on December 23.

Both @theyeezymafia and @onusofficial posted about the news, although the final aesthetic of the shoe is still up in the air.

In the rendering by Yeezy Mafia, the upcoming sneaker appears to have a predominantly green camo look with black soles. Onus however posted an image of the actual shoes in a brown-black camo pattern with olive soles.

Regardless, it looks like the team up is legitimate and is set to launch before Christmas. 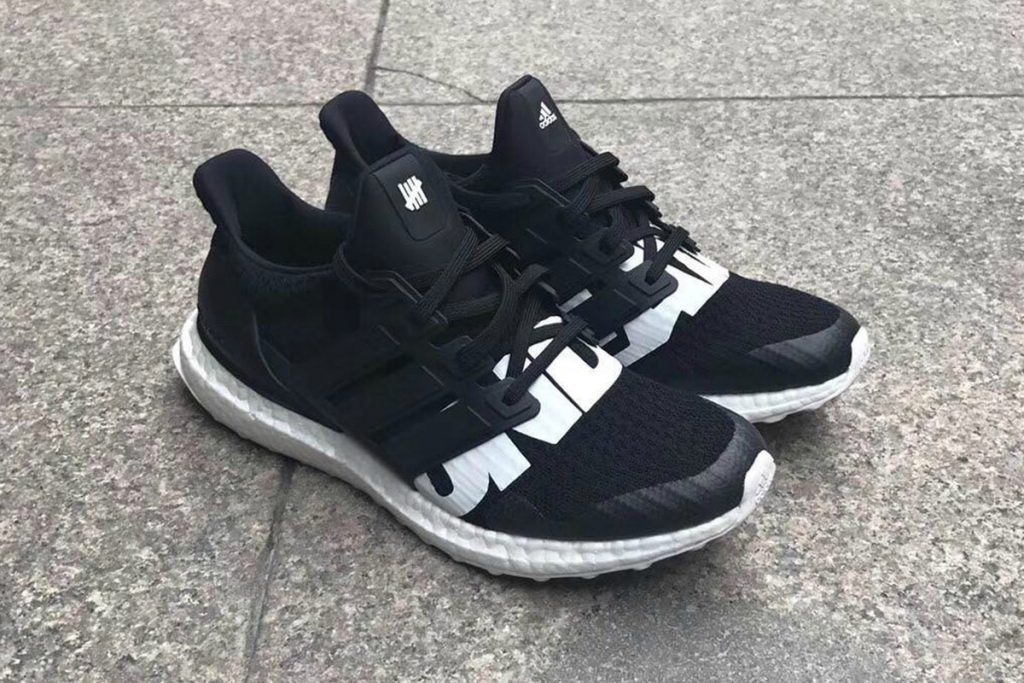 After a strong team up with Nike on the Air Max 97, UNDEFEATED is about to set 2018 on fire with an upcoming collaboration with adidas on an UltraBOOST.

There has been word on a possible collaboration between the two for while now, but thanks to sneaker Instagram user @wts1987, we have our best look yet at what that looks like.

In particular, the photos confirm the previously rumoured colour scheme of black and white. With the new images, it appears that the UNDEFEATED branding will appear on the tongue of the right pair, while the adidas logo will take its place on the left.

Oversized UNDEFEATED branding can also be seen across the uppers on both sides in white.

The collaboration is expected to drop in March 2018, although there hasn’t been any official word out yet.

We’ll be keeping a lookout for updates on this pair so stay tuned for more. In the meantime, check them out below. 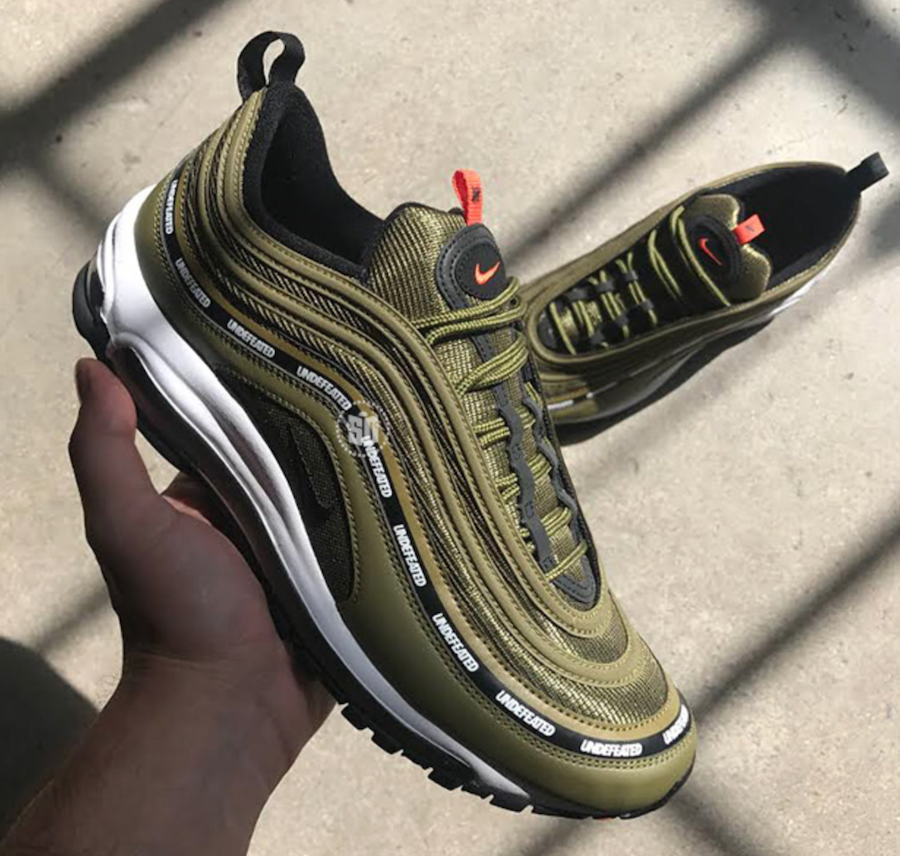 As previously rumoured, Undefeated has unveiled the third colourway for its famed Nike collaboration on the Air Max 97 silhouette.

Taking on the signature Undefeated “Flight Jacket” colourway in olive and orange, the pair will feature the collaboration’s trademark stripe of Undefeated’s branding around the shoe.

Despite rumours of a red stripe, the Undefeated streak across the shoe will come in black to contrast the olive upper.

The upcoming colourway will join the previously released “Black” and “White” colourways.

The sneaker will be releasing exclusively at Complex Con on November 4-5 and is expected to have a wider release in the coming weeks. Stay tuned for more updates on that.

The pair is expected to retail for US$170. 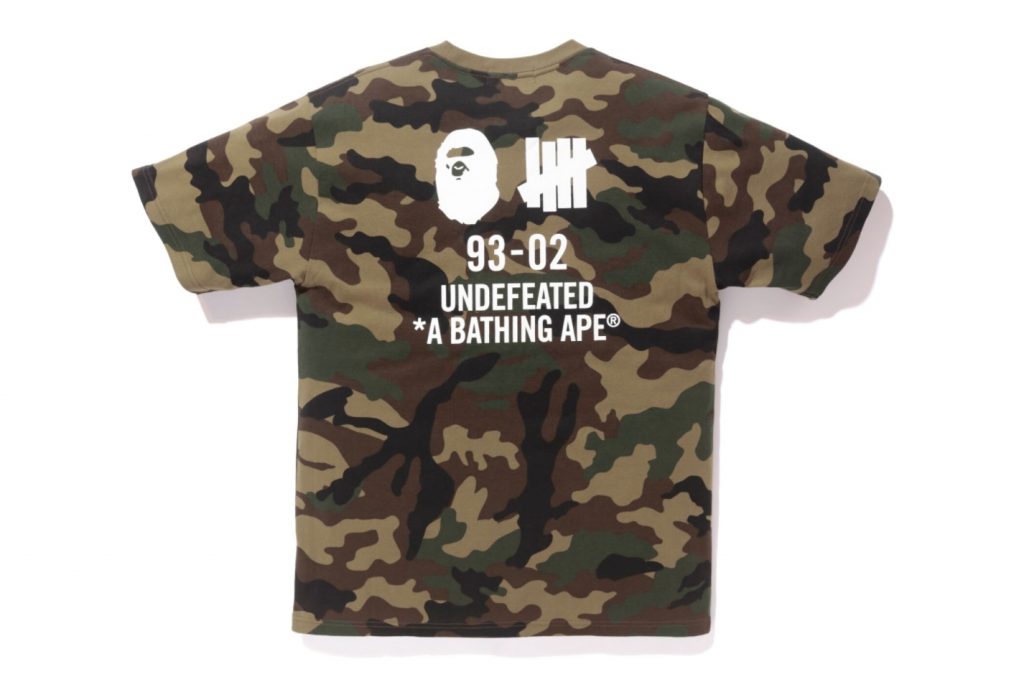 Streetwear giants UNDEFEATED and Bape are back with a brand new collaboration. In recent weeks, we’ve had several sneak peaks, leaving us with high anticipations.

Now, Bape and UNDEFEATED have officially revealed all the items for their latest capsule drop.

As expected from a team up between the two labels, the release will feature shark faces, camo designs and cross branding marks on all the apparels. The collection will span from jackets to shirts, sweatpants and caps.

Bape x UNDEFEATED capsule will premiere on the 21st of October at a special UNDEFEATED pop-up in Shanghai, China.

Another release on the 8th of November will drop in UNDEFEATED stores/online and selected BAPE stores. 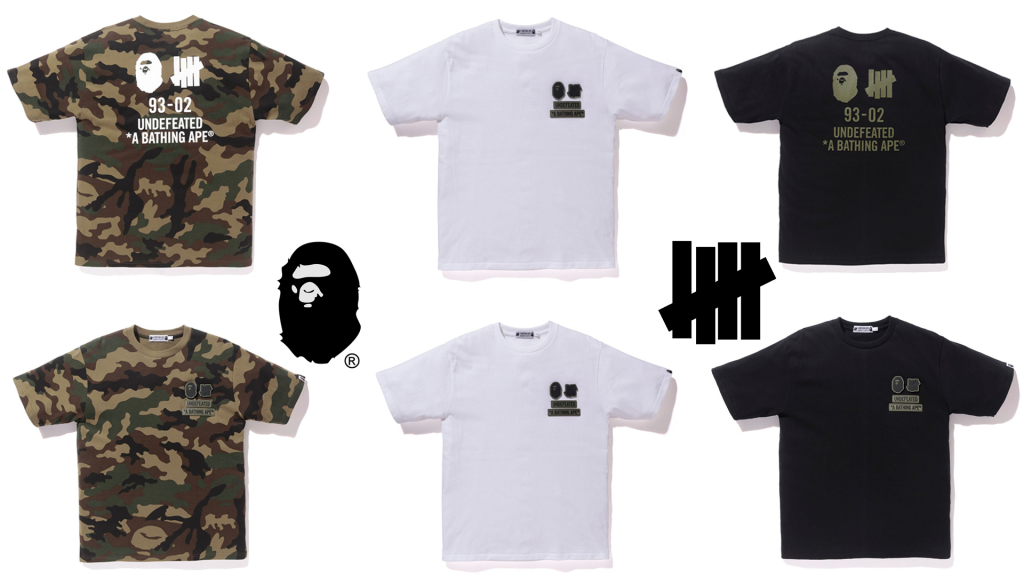 Here’s how you can cop: We’ve supplied you with more than enough information of the highly anticipated Undefeated x Nike Air Max 97 collaboration coming this week, but we now have an exclusive look at the collection of apparel that will be dropping simultaneously.

To commemorate the two brand’s 15-year partnership, a selection of hoodies, t-shirts, socks, as well as shoulder and messenger bags feature – all with Undefeated’s trademark logo and Nike swoosh.

The collection will drop together with the sneakers on 16 September, followed by and online release on UNDFTD’s online store.

Have a look below – 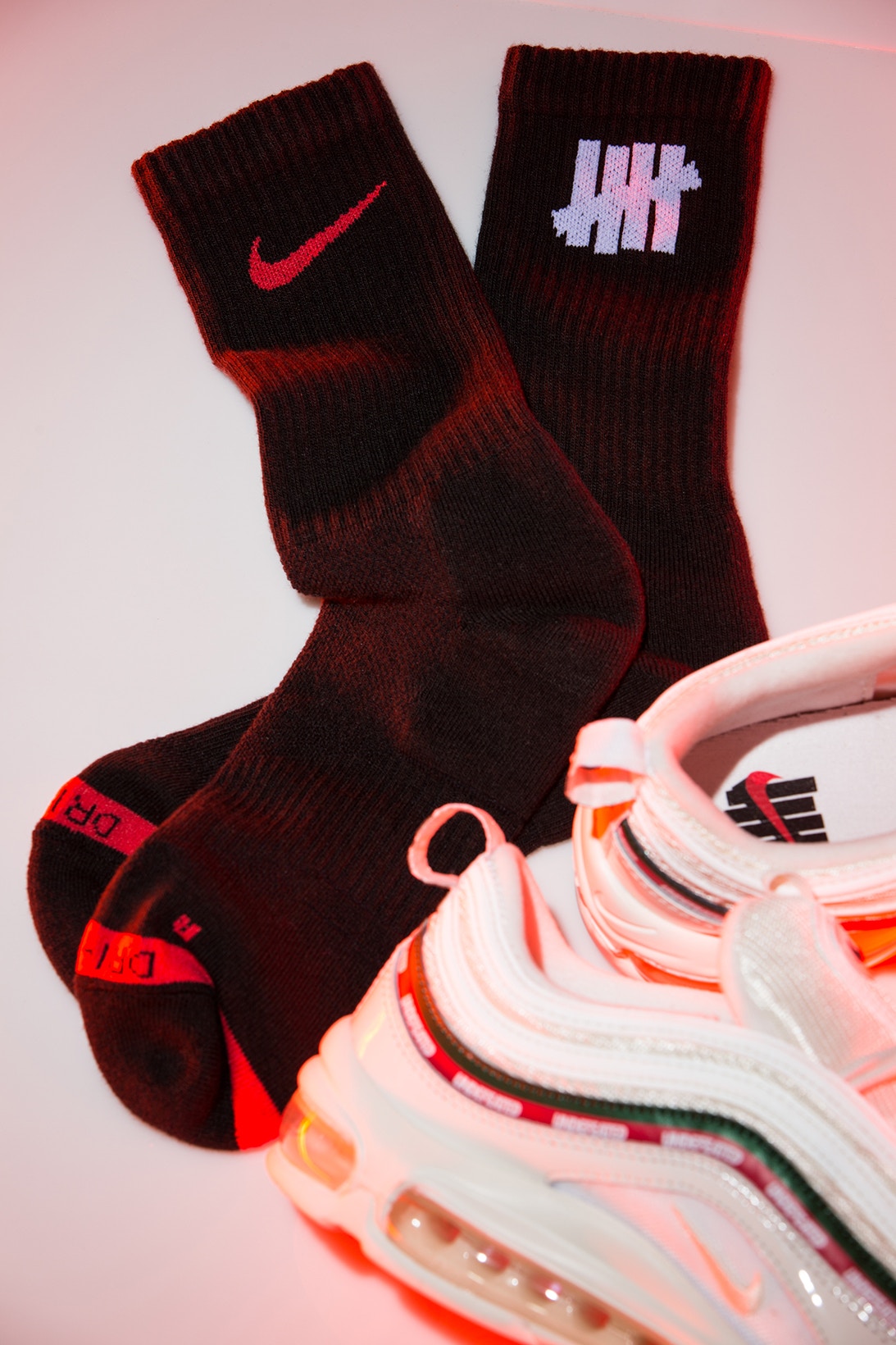 One of the most anticipated Air Max releases of 2017 – the Undefeated x Nike Air Max 97 OGs is scheduled to drop later this week.

We’ve covered the pre-release samples of the Black iteration as well as its White counterpart leaked by DJ Khaled previously, but now we have exclusive images courtesy of Nike themselves of the sneakers.

Featuring a patent leather upper with subtle Undefeated branding in green and red, both black and white colourways will first drop exclusively to UNDFTD stores on September 16, while the black pair will be set for a global launch on September 21 at a retail price of $180USD.

As far as previous Undefeated x Nike collaborations go by, you sure wouldn’t want to sleep on these.